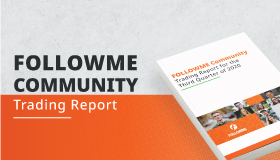 Our users - both traders and brokers continue to reap benefit by leveraging on FOLLOWME's unique features. Get a detailed analysis of the latest trading activity on our platform here.

Our users - both traders and brokers continue to reap benefit by leveraging on FOLLOWME's unique features. Get a detailed analysis of the latest trading activity on our platform here. Detail

Read more information about the best-performing stars in 2020 on the platform in the post below!

The number of copy traders (followers) earning a net profit in the third quarter this year on FOLLOWME has increased by nearly 9 percentage points compared to the first half of the year, reaching 48.4%. This also represents the highest profit–to-loss ratio among the three types of traders: copy traders, traders (signal providers) and individual traders.

On the other hand, under the independent traders’ category, the profitable accounts accounted for only 25.1%, which was significantly lower than traders. In the third quarter of 2020, the total number of trading orders in the FOLLOWME community was approximately 4.83 million, an increase of 18.6% from the second quarter.

KEY TAKEAWAY: With the on-going volatile environment, we highly recommend individual traders out there to have a risk management strategy in place and also make use of our COPYTRADE feature to enjoy a fruitful trading experience with the experienced traders and other copy traders.

If you want to get the full insights, read our latest report as featured above!

For non-commercial reprints, please attribute the source to FOLLOWME. For the commercial purpose of reprint or usage of this report, please contact FOLLOWME Branding Department to obtain the copyright. Email us at info@followme.com.

Major Trading Symbols on FOLLOWME from July to September A total of 233 Brokers were active in the FOLLOWME community, with approximately 15,000 active accounts and 4.83 million orders.

We are pleased to see this improvement among the brokers in the latest quarter as this will allow our users to benefit from the best traders in the industry. Among them, the profitable accounts ratio of the top five has improved significantly, and GKFX – the best in the group saw an increase of 14% compared with the first half of the year. 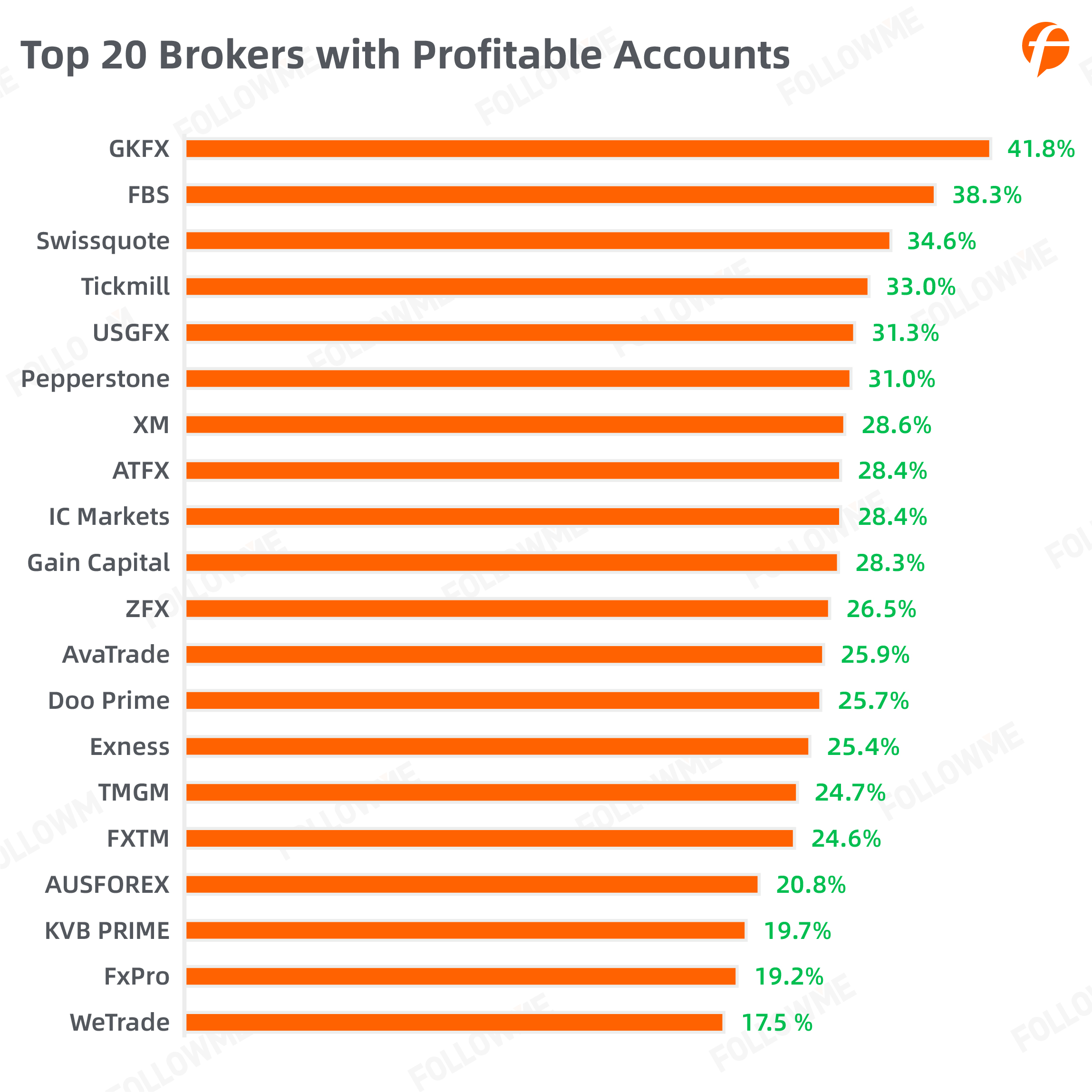 In the latest quarter, GKFX had the highest ratio of profitable accounts, at 41.8%, followed by FBS and Swissquote, at 38.3% and 34.6% respectively.

On another note, although IC Markets replaced the regulator in the third quarter, IC Markets has become the most popular trader among the new users on FOLLOWME Trading Community due to its low spreads. It shows that when a new user chooses a Broker, the platform spread is a very important factor. Among them, the top 20 Brokers saw an average order number of accounts above 110, and the highest is 936, which is an increase from 760 in the first half of the year.

On top of that, we also want to highlight another significant improvement in the efficiency of the copy trade orders handled by these brokers. The total copy trade orders in the third quarter was about 800,000, of which 676,000 were opened and closed within ONE second, accounting for 84.5%, compared with 76.1% in the first half of the year, and this indicated an improvement in their order processing efficiency. 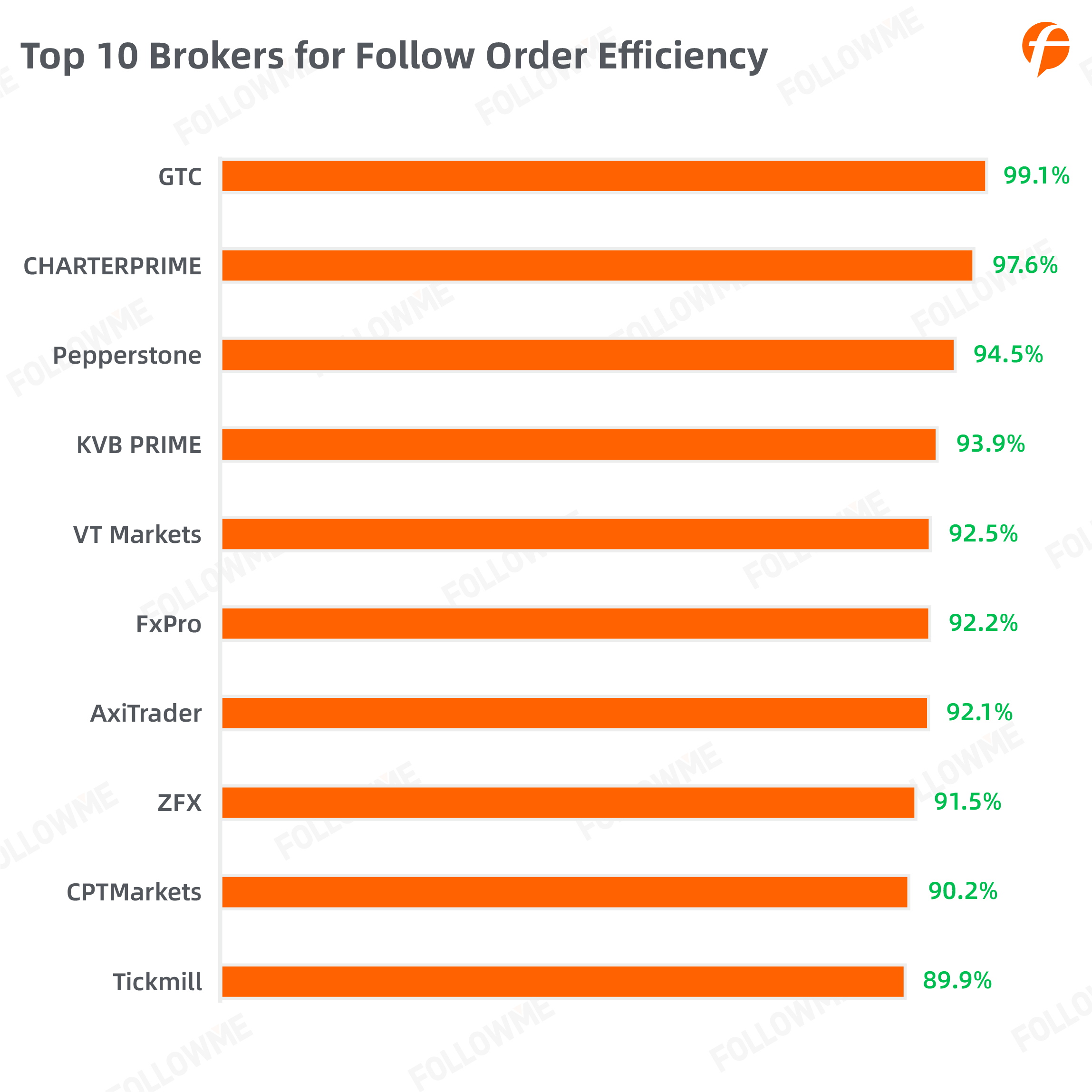 How to Use Signal Feature

It was not easy to make it through 2020 and definitely will not get easier this year given the on-going circumstances. However, not all is lost as we witnessed some of the greatest moments in human history in 2020. As for FOLLOWME, we are glad to celebrate some of the brightest stars here today that
16

Total Trading Orders: 1,653,609 December was a bittersweet month for many of us as we welcome the new year with a heavy heart. As COVID-19 is still paving its way in multiple regions, many countries are struggling to keep their economies afloat. On the other hand, the U.S. went through another chaot

Photo: Instaforex In 2020, the new COVID-19 infection upset plans of both travelers and participants in the financial markets. Some managed to make money, while others saw their fortunes dive as they failed to navigate the new reality. It is a mistake to assume that the volatile currency market and

Stansberry Research
14 Jan
Bitcoin Is Better Than Gold in Ways, but Now Is the Time for Mining Stocks. #bitcoinsurge##BTC/USD##marketoutlook2021#