The U.S. Dollar is trading marginally higher against a basket of major currencies early Friday after posting a potentially bearish closing price reversal top the previous session. Although the greenback has stabilized below its recent two-month high after early session weakness, it is vulnerable to the downside as appetite for risk is being lifted by the hopes that U.S. fiscal stimulus talks would resume.

The dollar is on track for its best week since early April, driven by risk aversion that made traders abandon their short positions as the outlook for the global economic recovery darkened with a second wave of COVID-19 cases in Europe.

Sentiment is being boosted by reports that Democrats in the U.S. House of Representatives are working on a $2.2 trillion coronavirus stimulus package that could be voted on next week. This may be helping to cap today’s gains. 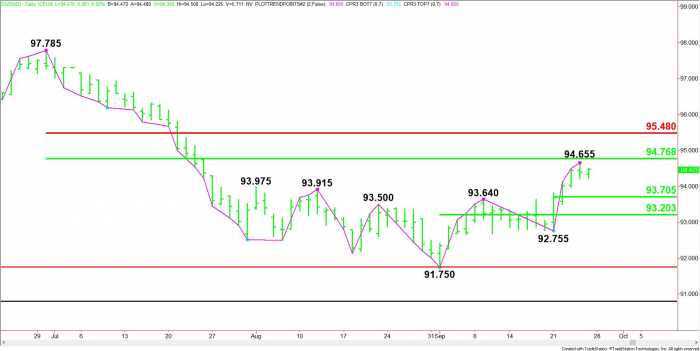 The main trend is up according to the daily swing chart, but yesterday’s closing price reversal top may be a sign that momentum is getting ready to shift to the downside.

The retracement zone at 94.770 to 95.480 is very important to the structure of the longer-term chart pattern. Trader reaction to this zone will set the near-term tone.

Based on the early price action, the direction of the December U.S. Dollar on Friday is likely to be determined by trader reaction to 94.225.

A sustained move over 94.225 will indicate the presence of buyers. They are likely defending against a confirmation of the closing price reversal top. Overtaking 94.655 will negate the chart pattern and could trigger a surge into 94.770 to 95.480.

Taking out 94.225 will confirm the closing price reversal top. If this move creates enough downside momentum then we could see a 2 to 3 day break into the first pivot at 93.705, followed by the second pivot at 93.200. Look for buyers on the pullback into these levels. #USDollarIndex##FX#

Disclaimer: The content above represents only the views of the author or guest. It does not represent any views or positions of FOLLOWME and does not mean that FOLLOWME agrees with its statement or description, nor does it constitute any investment advice. For all actions taken by visitors based on information provided by the FOLLOWME community, the community does not assume any form of liability unless otherwise expressly promised in writing.
2
Anything say to Susan_o ? 0 Comments, 2 Participants
Login Comment
Still 0 letters left The maximum number of characters has been entered Comments