Mining production? No. China’s consumer demand? No. The main drivers of gold prices are, as I’ve repeated many times, the U.S. dollar and real interest rates. You don’t believe it? You don’t have to – just look at the charts below.

The first one displays the greenback and the dollar-denominated price of gold. Because other series start much later, I used here the Trade Weighted U.S. Dollar Index against major currencies that circulate widely outside the country of issuance. Although the correlation is not perfect, the inverse relationship is quite strong and bull and bear markets in gold coincide with the bear and bull trends in the U.S. dollar. 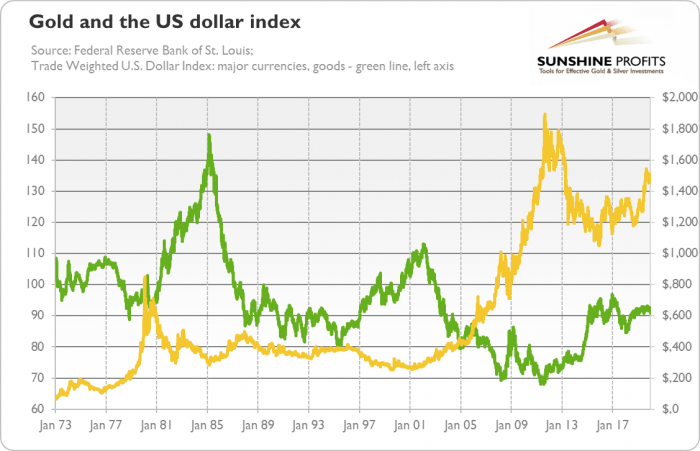 The second chart presents the U.S. real interest rates and the price of gold (London Gold Fix). As the data series for the yields of inflation-indexed Treasuries (which I treat a proxy for real rates) start only in 2003, I use here nominal bond yields adjusted for the CPI. Again, the negative relationship between displayed variables is far from being perfect (actually it is only -0.31), but it is clear that gold rallied the most when the real interest rates were negative. Now, let’s zoom in and use more recent data. The chart below shows the price of gold and Trade Weighted U.S. Dollar Index against the broad basket of currencies. As the two lines looks like their mirror images, the inverse relationship between the yellow metal and greenback becomes even clearer now. 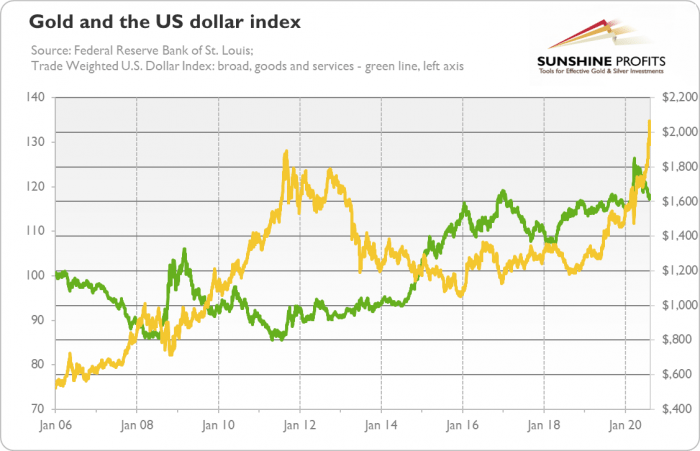 Or… does it really? The correlation coefficient is 0.26, so the relationship was positive in the analyzed period! Never trust your eyes, only numbers are real! As one can see in the chart below, the 100-day rolling correlation between gold and the U.S. dollar is quite volatile. Which is not so surprising, when we realize that both the yellow metal and the greenback can serve as safe-haven assets during economic crises. However, the correlation has become more negative recently. 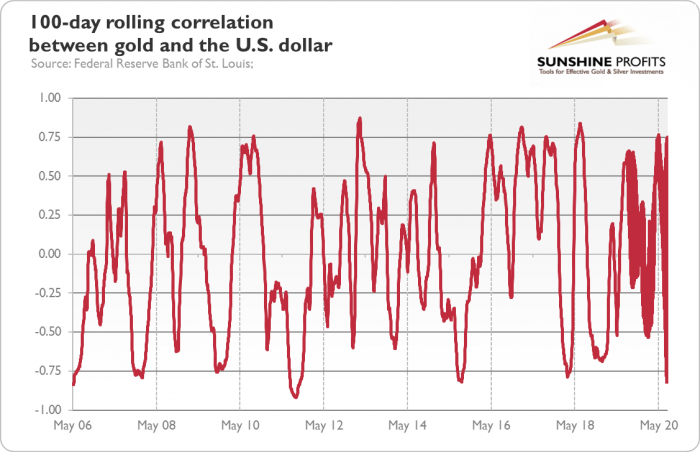 Similarly, the next chart zooms in on the relationship between gold and real interest rates, using more recent data and yields of TIPS. Again, the inverse, mirror relationship between both variables becomes more than clear. It is obvious at first sight, without any quantitative analyses. But never stop at the first impression! The correlation coefficient is -0.85, so it is indeed very strong negative correlation. And in the past 100 days, it was even stronger (-0.95), as the chart below shows. As one can see, correlation is not fixed but it is constantly changing. And gold has become recently even more sensitive to changes in the real interest rates. What does it all mean for the gold market? Well, as I have repeated many times, the strong relationships with U.S. dollar and real interest rates stem from the fact that gold is not merely a commodity, but it is a monetary asset. Of course, the international price of gold is quoted in the dollar, so when the value of the greenback increases (decreases) relative to other currencies around the world, the price of gold tends to fall (rise) in the U.S. dollar. However, there is something more to the story. Gold is seen as another currency, or a bet against the greenback and other fiat currencies, so during times of fear, the price of the yellow metal tends to rise as confidence in the Fed (and other central banks), the U.S. government and the current monetary system fails.

The real interest rates are connected, of course, with the exchange rates. The lower the rates, the weaker the currency is. So, low interest rates tend to weaken the greenback, which also supports gold. Moreover, because the yellow metal does not bear any yield, the low rates reduce the opportunity costs of holding gold compared to other assets. And TIPS are used as protection against inflation, just as gold, so they move together.

Question: what about when the rates are low, or even negative? When either inflation is high, or when nominal interest rates are close to zero. Both cases mean that economic situation is grave or even that central banks have lost control, which drives investors toward gold.

Now, the real interest rates are at very low level, so there is a risk of a rebound. However, they were even lower during the 1970s, so the reversal is not certain, especially that the Fed is not even thinking about thinking about hiking the federal funds rate. So, although the U.S. central bank distanced itself somewhat from the idea of yield curve control, the interest rates are likely to remain ultra low for the foreseeable future. Which is great news for gold.

When it comes to the U.S. dollar, we see that it has peaked recently. It can go, of course, further north, but the current environment of the dovish Fed, negative real interest rates, narrowing divergence between monetary policies conducted by the U.S. and other countries, and soaring fiscal deficits and federal debt are important headwinds for the greenback. We know that other central banks and governments are not much better than their American counterparts, but it seems that more and more people are starting to worry about the soundness of the U.S. dollar (although the greenback, together with gold, still behaves like the safe haven during economic crises). So, more investors could be interested in buying gold, the ultimate currency. #gold##USDollarIndex#

Disclaimer: The content above represents only the views of the author or guest. It does not represent any views or positions of FOLLOWME and does not mean that FOLLOWME agrees with its statement or description, nor does it constitute any investment advice. For all actions taken by visitors based on information provided by the FOLLOWME community, the community does not assume any form of liability unless otherwise expressly promised in writing.
4
Anything say to Susan_o ? 1 Comments, 5 Participants
Login Comment
Still 0 letters left The maximum number of characters has been entered Comments